Sign in Register
Posts > The Audition Room: Interview with Chuck Hudson (Part I)

The Audition Room: Interview with Chuck Hudson (Part I)

For those who haven't had the opportunity to work with Chuck Hudson, the following interview gives a glimpse of why he is one of the most sought after coaches and directors around; he has an incredible gift in helping both emerging and established professionals bring their physical presentation to life, both in the audition room and in performance. It is a great pleasure to offer this interview covering the work one should (or must!) do to prepare your audition arias: part II, covering Chuck's thoughts on the singer's relationship with their stage director, will come next week.  Enjoy!

First of all, thanks so much for asking me to take part in this interview. I enjoy working with young professional artists, and I also value what YAP TRACKER is doing to organize and distribute information to those artists in such a wonderful way.

Please share a little about your background as a coach.

In 2008, I was a guest professor of Advanced Acting and Stage Director at Cincinnati Conservatory, and I was a Guest Stage Director at Indiana University Opera Theatre. I was a professor at the University of Houston School of Theatre, at Cornish College of the Arts Drama and Music Departments, and I was an annual Adjunct Faculty Artist at North Carolina School of the Arts Theatre Department and Fletcher Opera Institute. For two seasons I was the Artistic Associate of La Lingua della Lirica in Italy, and I have been an annual Master Teacher at San Francisco Opera’s Merola and Adler Fellows programs for 7 years. I was recently in Australia working with the singers at The Dame Nellie Melba Opera Trust in Melbourne and the Western Australia Academy of Performing Arts in Perth, and at SIVAM in Mexico City. Right now, I am the Schmidbauer Guest Artist at the Theatre Department of Stephen F Austin State University, directing A MIDSUMMER NIGHT’S DREAM.

When I am home in NYC between productions, I have a Private Coaching Studio in mid-town.

I call it The Cube of Space Technique, which is a 3-dimenstional approach to the aria; dimensional in the space itself and also dimensional in a dramatic sense. I focus on the “dramatic sculpting” of the aria itself—the dramatic and physical presentation that reveals the individual performer; helping them to become more physically and dramatically active.

This technique creates a genuine map of the aria that the singer can use to make the invisible visible without “acting it out”, gaining control of the piece no matter where they audition. You can find out more about it on my website:

Address this statement: “If I’m focusing on my physicality, I’m afraid my singing will suffer in an audition.”

Of course, one has to be ready for this level of work. If you are just learning to sing, then, yes, wait until you have some level of control before adding the next layers of character and action. I liken it to working on a Trigonometry level with students of Algebra—they may perceive the value of the work, but they are not advanced enough yet to actually do that work until the “ground work” of singing has been established.

After every public master class series I do with singers, remarks come from both public and professionals alike—it has even been quoted in the press—that “their singing improved.” There is an “effortlessness” about the singing that happens all by itself when this work is explored by a trained singer. The physicality is secondary to the dramatic focus—the physicality is the visual expression of the dramatic action, so they must focus on the Acting, not the Physicality, which actually supports the singing.

Clean singing that is technically perfect but expresses nothing leaves us cold. Naïve personal freedom of expression with no technique is just a mess. There must be a balance of the two…in fact the two become one.

Any tips on how singers should prepare physically for their coachings and their auditions?

I am sure everyone on YAP Tracker knows that the audition is not a social event, even though it may be the one time you see colleagues in a long time. The time spent immediately before the audition is time devoted to getting ready: warming up vocally and getting yourself ready to “hit your first moment.”  So, physical preparation or not, here is the ACTING work that must be done:

Preparation for a coaching is also important and singers must be self-reliant about this. Indeed warming up vocally is important but research on the character is more important than even physically warming-up.

Dos and don’ts on staging an aria for an audition

Dos and don'ts on a singer's physicality in an audition room?

Do not move for movement’s sake.  Do not wander around or shift weight back and forth as you sing. You get 1 step to 1 step and a half off of the center point before it becomes “too much movement.” When you hear, “don’t move your hands and arms” it means “don’t move your hands and arms like THAT!” Gesture and movement can distract from the singing as much as it can support the singing. Do any hand and arm gestures help you get what you want in this moment, or are you just doing what you do in the voice studio to “find the line” or the rhythm in a technical way?

Do not look AT the auditioner. It will just throw you when I look at your resume or turn to a colleague to ask about calling one of your references.

So, what do you do? You prepare your first moment and you structure the presentation of the aria to create action: “I am the Countess. Today is the day I am going to change my life and get my husband’s love back. Right now, I am asking the god of Love to support my decisions and actions. I decide in this aria that I would rather die than continue living like this.” Now, sing Porgi amor. Does the Countess fidget? No. Does she wander around the room? No. Does Mozart provide time for psychological and dramatic depth of character and action in this aria that introduces the highest status character in the show? YES, he does!

Any final thoughts on what a singer can do to shine on stage?

I have found that there is one thing that most performers do not take into consideration as they are auditioning. Remember, the panel is ON YOUR SIDE. We SO want you to be the one we choose from the minute you walk in the room. Now here is a thought that will be playing under everything that happens in the room: “Do I want to spend 3 weeks in a rehearsal room with this person?” And if it is a program, “Do I want to spend several months working with this person in a group of others?”

Be yourself. Seriously, just what your parents have always told you. But who are you? Thousands of years ago a piece of advice was inscribed above the Temple of Apollo in Greece: KNOW THYSELF. Look back over this entire interview and really it all boils down to that! BE YOURSELF…well, you cannot BE yourself if you are not self-aware, aware of others, and then take some action to KNOW yourself. It will make you a better artist, and it will make you a better person, too! 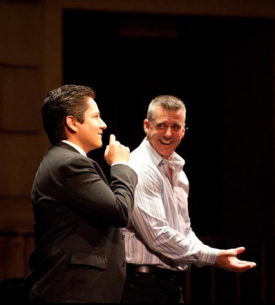