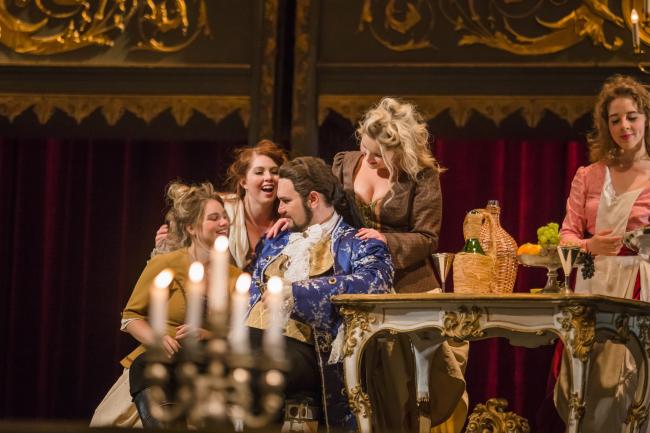 Prague Summer Nights is casting select roles in Le nozze di Figaro & Die Zauberflöte, including the Count, Don Basilio and Papageno. Scholarships are available. In addition to working with stars Lawrence Brownlee and Rosalind Plowright in Europe's most prestigious venues, participants will perform in fully-staged productions with orchestra at the historic Estates Theatre, featuring sets and costumes from the National Theatre—all while receiving lessons, coachings and masterclasses from both PSN's world-class faculty and guest clinicians from Prague Conservatory. Brownlee, Plowright and Washington Post critic Anne Midgette will serve as adjudicators for the inaugural Prague Summer Nights Vocal Competition. PragueSummerNights.com/apply.

Debuting in 2015 and hailed for its “high-quality productions”  (Hospodářské noviny) and “sophistication” (Prague Post), Classical Movements’ Prague Summer Nights: Young Artists Music Festival (PSN) affords aspiring young professionals in the world of opera and orchestra the opportunity to perform in some of Europe’s most historic venues and offers fully-staged opera productions, orchestral performances, chamber music concerts, an opera scenes program, and even a cabaret concert. The 30-day festival features 18 performances, coachings, masterclasses,  lessons, and career development opportunities for its participants. Past programs have featured performances in the famed Estates Theater, Rudolfinum, and Smetana Hall of Prague and, in 2017, the program made its first trip to Salzburg, performing in the Große Saal of the Mozarteum.

In 2018, PSN is proud to return to the historic Estates Theater, located in the heart of one of Europe’s most beautiful and historic cities, Prague. Fully-staged performances of  Le nozze di Figaro and Die Zauberflöte, with orchestra, will be presented on the stage of the Estates with professional sets and historic costumes from the National Theater.

For vocalists, additional concerts at the festival include an opera scenes program which will feature scenes from important Czech operas such as Dvořák’s Rusalka and Smetana’s Bartered Bride. Singers will work directly with coaches and faculty from the Czech National Theater and the Prague Conservatory on diction, language, acting, and character development. A cabaret performance of music from the American Songbook and Broadway, including the music of Leonard Bernstein, George Gershwin, Stephen Sondheim, Irving Berlin, Kurt Weill, and Cole Porter will take place in a famous Prague jazz club.