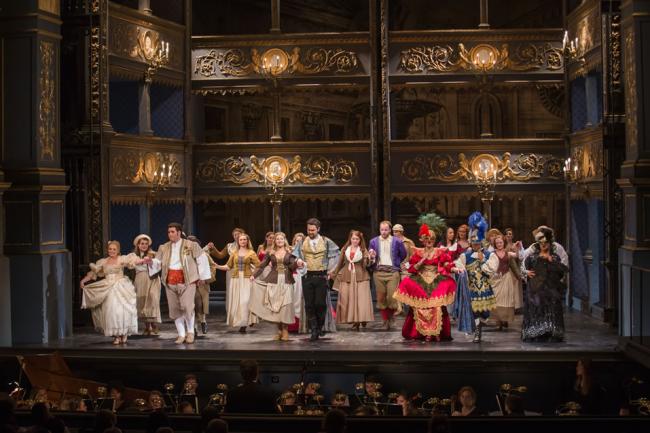 Study with opera legend Sherrill Milnes in Prague, Salzburg and the Bohemian town of Tabor. Prague Summer Nights is casting for the roles of First Lady, Papagena, Sarastro and Monostatos for Mozart's Die Zauberflöte, conducted by Arthur Fagen, Music Director of the Atlanta Opera. Applications for the PSN Vocal Academy are also being accepted: Understudy a starring role of your choice, perform in opera scenes, cabaret, song recital, sing chorus for opera productions and receive lessons/coachings from our faculty. Performances at the Lichtenstein Palace and St. Simon & Jude in Prague, Oskara Nedbala Tabor, and the Großer Saal of Salzburg’s Mozarteum.1 month, 3 cities, 18 performances...APPLY TODAY! www.praguesummernights.com

Now entering its third season, Classical Movements is pleased to announce the 2017 edition of the Prague Summer Nights Young Artists Music Festival, to be held from June 12th to July 10th 2017. Travel to Prague, Salzburg, and the Bohemian town of Tabor where you will spend one month living in three incredible European cities performing fully staged and concert versions of Mozart’s Marriage of Figaro and The Magic Flute. Prague Summer Night’s presents eighteen concerts each summer including fully staged and concert operas, an opera scenes program, cabaret, and voice recitals.  Participants will work directly with opera legend and stage director Sherrill Milnes and a renowned faculty of teachers and coaches from the United States and Europe. Performances feature full costumes and orchestra, and are presented in some of Europe’s most historical venues. Noted for its “very professional” and “over the top” productions by critics, Prague Summer Nights has amassed a loyal audience in its first two years and performs sold out concerts each season. In 2017, the festival will close with four performances in the famed Mozarteum in Salzburg Austria, the city of Mozart!

Past participants of the Prague Summer Nights Young Artists Music Festival have come from 6 continents and more than 20 countries and have sung with such prestigious institutions as The Metropolitan Opera, The Washington National Opera, and the Paris National Opera. Samples of past performances of Mozart’s Don Giovanni in the famed Estates Theater may be found at: https://www.youtube.com/watch?v=GTrjWP3F7C0

Online applications are currently being accepted!